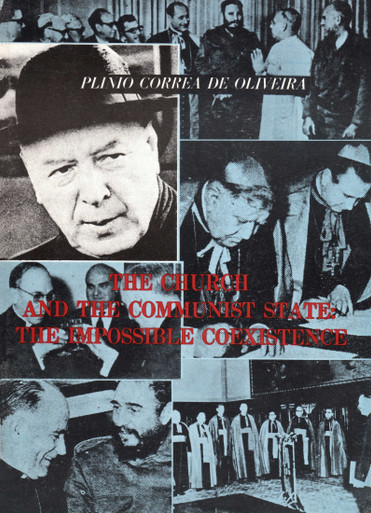 The Church and the Communist State: The Impossible Coexistence - eBook

As is well known, it is possible to have a Communist regime in which the Church is allowed to continue functioning, but with only a minimum amount of freedom. Poland was an example of this situation.

This raises a question: Can a Catholic in the West legitimately view the possibility of a Communist regime in his nation as morally acceptable?

Yet there is only one solution to the central question we have raised, and it is argued convincingly by Plinio Corrêa de Oliveira in his essay, “The Church and the Communist State, the Impossible Coexistence.”

When this study was first published in August 1963, Communist propaganda and diplomacy increasingly strove to foster a regime of peaceful coexistence between the capitalist and communist worlds. At that time, relations between East and West were just beginning to emerge from the Cold War.

The “pacifist” Soviet effort was directed mainly at the two great pillars of resistance to communism: in the temporal sphere, the United States, and in the spiritual sphere, the Catholic Church.

Moscow’s propaganda against the United States employed useful innocents (whose innocence was at times contestable but certainly always useful). They would spread an atmosphere of sentimental and pacifistic optimism that surreptitiously led Americans to forget past experience and hope for a definitive reconciliation with the smiling Soviet leaders of the post-Stalinist era.

This same optimistic ambience was spread inside the Church, at first by groups of theologians and activists, some naïve while others avowedly leftist. And while the anti-religious campaign continued full blast throughout the Communist world, the illusion that a truly peaceful coexistence was possible between the Church and Communist regimes continued to gain ground.

This study is intended to create in Catholic circles as many obstacles as possible to Moscow’s deceitful “pacifist” maneuver.