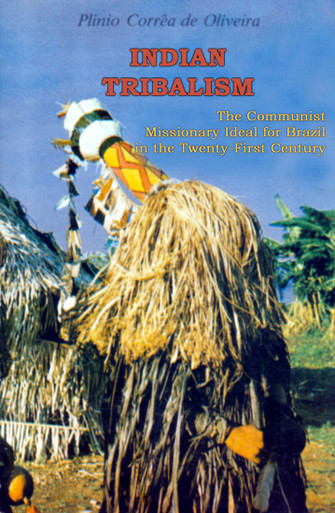 Indian Tribalism: The Communist-Missionary Ideal for Brazil in the Twenty-First Century - eBook

Introducing this most-timely book. We invite you to read this prophetic work and apply it to the afflictive conclusions of the 2019 Synod. Plinio Corrêa de Oliveira foresaw this threat of this new form of missiology in 1977.

Indigenous tribalism as a model for the West was a major part of the discussion at the Synod. “Updated” missionaries, like the one mentioned above, told the Synod that the Indians have much to teach the Church.

When you read these texts, do not go over them quickly. Stop before each one and accurately gauge the depths of the chasms to which it invites. Listen to them preach about the dismantling of the family and contemporary society, the extinction of modesty and the death of the whole Christian tradition. Listen to them accuse white settlers of being tyrannical oppressors and bloodthirsty thieves. See how they set out to destroy the accomplishments of the pioneers and missionaries of bygone centuries, not even sparing the sacred work of the great Jesuit missionary Anchieta, whose almost superhuman moral profile achieved such a magnificent missionary success with the natives. Hear them call upon youths in seminaries and convents throughout the country to join this tribal “neocommunism,” which boasts of going beyond communism.