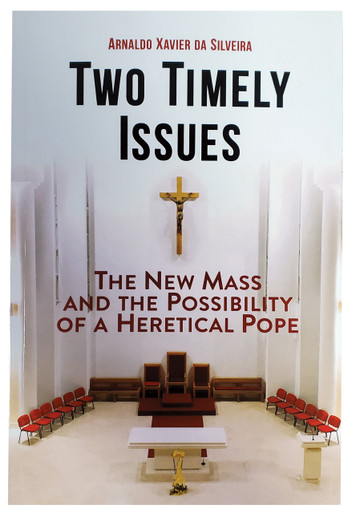 Two Timely Issues: The New Mass and the Possibility of a Heretical Pope

Amid the liturgical confusion following the Second Vatican Council, many Catholics did not know where to turn for guidance about the critical yet complex matter of the Novus Ordo Mass. This book was part of the debate from the beginning, with Brazilian author Arnaldo Xavier da Silveira publishing his analysis seven months after the New Mass went into effect.

It is an exhaustive study that leaves no stone unturned and immediately became controversial. Pope Paul VI tried to suppress it. Thus, the book circulated only as mimeographed copies among bishops and members of the traditional networks that formed around the world.

Since then, Two Timely Issues: The New Mass and the Possibility of a Heretical Pope has decisively contributed to the debate. The Portuguese original was translated into Spanish, French, and English.

However, there was never a definitive English edition. This 2017-revised edition now fills the void. It is especially timely given the renewed liturgical wars that have erupted.

Two Timely Issues is a must-read for those who grieve for the devastation caused by the liturgical revolution inside the Church. It is a battle manual to help those resisting the self-destruction in the Church

Beautifully soft bound, 365 pages, Two Timely Issues is a must read in order to understand the current crises afflicting the Holy Catholic Church.